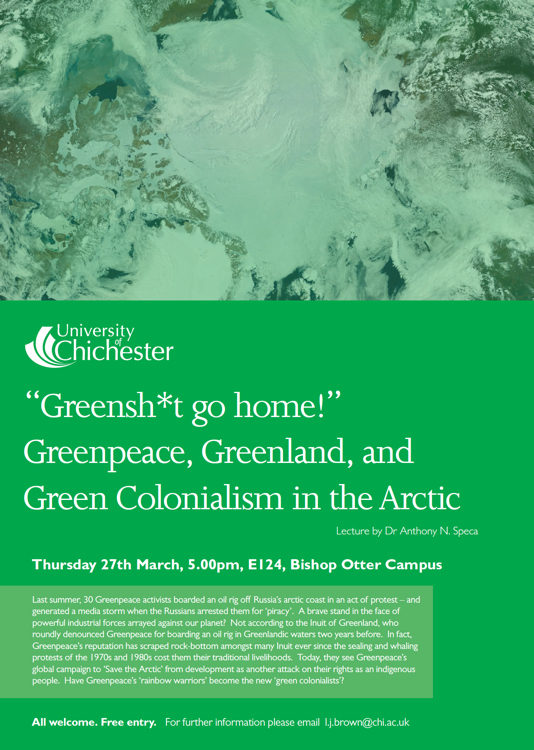 I’m delighted to have been invited to speak at the University of Chichester tomorrow, March 28, as part of the History Department’s lecture series on contemporary politics.

Making use of a popular slogan in Greenland, I’ve entitled my talk “‘Greenshit go home!’ Greenpeace, Greenland and green colonialism in the Arctic”. My focus will be the controversy between Greenpeace and Greenlanders over the issue of offshore oil development there, and how Greenpeace’s campaign against the seal hunt in the 1970s and 1980s still colours their reputation amongst Inuit:

Last summer, Greenpeace activists boarded an oil rig off Russia’s arctic coast in an act of protest—and generated a media storm when the Russians arrested them for ‘piracy’. A brave stand in the face of powerful industrial forces arrayed against our planet? Not according to the Inuit of Greenland, who roundly denounced Greenpeace for boarding an oil rig in Greenlandic waters some years previously. In fact, Greenpeace’s reputation has scraped rock-bottom amongst many Inuit ever since the sealing and whaling protests of the 1970s and 1980s cost them their traditional livelihoods. Today, they see Greenpeace’s global campaign to ‘save the Arctic’ from development as another attack on their rights as an indigenous people. Have Greenpeace’s ‘rainbow warriors’ become the new ‘green colonialists’?

As readers of this blog know, I’ve previously criticised Greenpeace for taking an uncompromising and even colonialist approach to the Arctic and its peoples. My criticisms led to an exchange with Greenpeace Canada in Northern Public Affairs magazine. This talk at the University of Chichester tells a bit of the backstory.