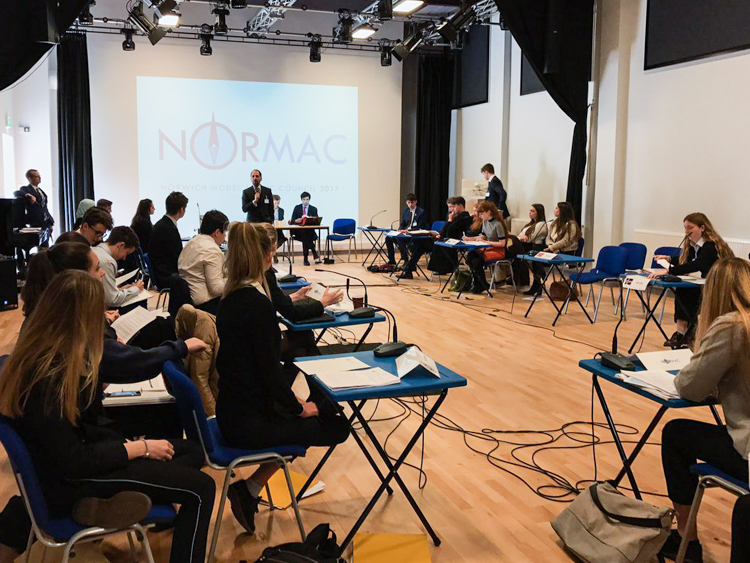 Over the weekend of 21st to 23rd April, 35 pupils from six secondary schools gathered at Norwich School in the UK for the second annual Norwich Model Arctic Council (NORMAC).  So far as I know, NORMAC is the only secondary-school level Model Arctic Council in the world today.  Like the better-known Model United Nations, NORMAC is an experiential learning initiative in which pupils play the roles of diplomats attending meetings of the real-world Arctic Council.  I created NORMAC in order to raise awareness and understanding of the Arctic amongst youth, and this year’s conference follows a successful launch in July 2016.

NORMAC 2017 kicked off with a welcome dinner on the Friday evening.  Our keynote speaker was Ms Christine Kelly of the Polar Regions Department in the UK Foreign and Commonwealth Office, who leads the UK’s own observer delegation to the Arctic Council.  There followed many hours of diplomacy on Saturday and Sunday, as delegates simulated meetings of three Arctic Council Working Groups—AMAP, PAME and SDWG—as well as a Senior Arctic Officials’ meeting and a Ministerial.  By the closing ceremonies on Sunday afternoon, delegates could congratulate themselves on having achieved consensus on a number of questions facing the Arctic today—Arctic wetlands and climate change, commercial fishing in the central Arctic Ocean, and educational opportunity for Arctic children.

Most importantly, just as at NORMAC 2016, delegates had the opportunity to understand better a unique region of the world that few of their peers have ever experienced.  What makes NORMAC unusual amongst model-diplomacy conferences is also what makes the Arctic Council unusual amongst international organisations—permanent seats for Arctic indigenous peoples around the negotiating table, and a commitment to consensus-based decision-making.  In practical terms, this means that pupils who sign up to NORMAC learn not only about the Arctic, but also about the indigenous peoples who call it home.  And they learn not only how to take a position and defend it, but also how to negotiate in good faith and find the bridging solution.

The third annual NORMAC conference is already scheduled for February 2018.  I was delighted that NORMAC 2017 attracted schools not only from the UK but also from Spain, and I hope that NORMAC’s profile and reach will expand even further.  If your school would like to participate, please don’t hesitate to register early interest.  I’d particularly welcome participation from schools in the Arctic, and especially from indigenous pupils.

Finally, special thanks must go to the Norwich School pupils and staff who assisted me in organising and running NORMAC 2017.  We received glowing feedback from both delegates and teachers alike, and I look forward to next year.