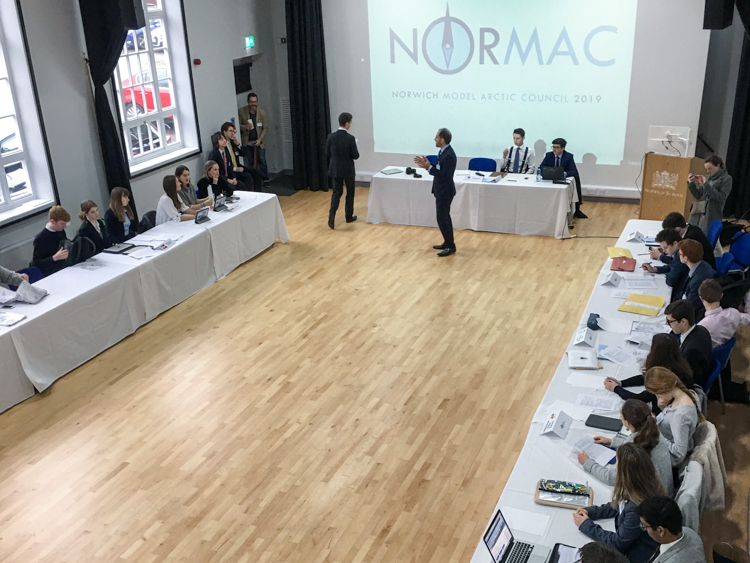 Last week, the fourth annual Norwich Model Arctic Council (NORMAC) convened at Norwich School in the UK.  NORMAC 2019 was a longer event than either NORMAC 2017 or NORMAC 2018, spanning three days from the afternoon of Thursday 27th February to the afternoon of Sunday 3rd March.  But it was again a sizeable and international conference, involving 42 pupils from six secondary schools in the UK and Spain, who between them represented nine different home countries in Europe and Asia.

The next two and half days involved many hours of diplomatic meetings.  On Friday, delegates convened at Anteros Arts Foundation to simulate meetings of three Arctic Council Working Groups—AMAP, CAFF and SDWG.  Delegates considered a number of questions facing the Arctic today—meteorological cooperation in the Arctic, whaling in Arctic waters, and the growth of Arctic shipping.  Having attempted to develop joint approaches to these issues in Working Groups, delegates reconvened at Norwich School on Saturday and Sunday to simulate a Senior Arctic Officials’ Meeting and a Ministerial. 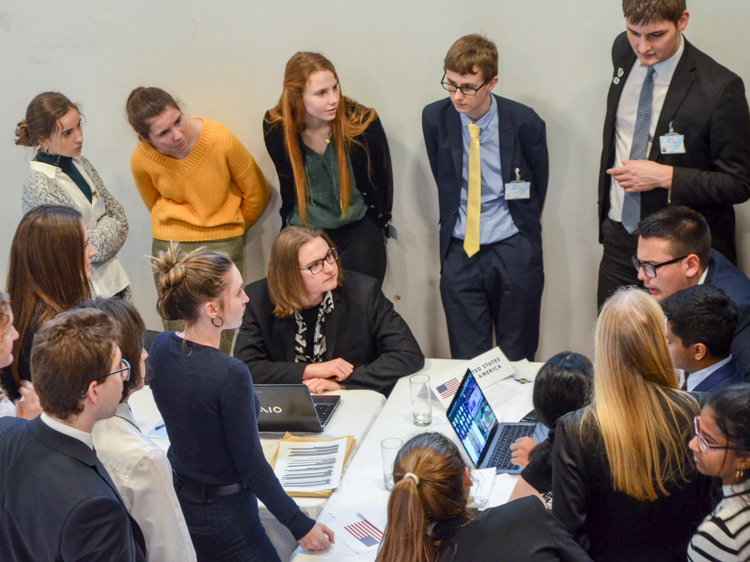 Unlike at NORMAC 2018, where political-level consensus proved elusive, delegates to NORMAC 2019 were able to reach consensus on all issues on the conference agenda.  This was not without some difficult diplomacy, as the photo from the Ministerial on the left shows.  An important objective of NORMAC is that pupils learn that building consensus is a demanding task—and considering that the delegation in question was that of the USA, a visual comparison with the viral photo from the 2018 G7 Summit is instructive!

In between the intense diplomacy,  delegates also enjoyed a formal dinner on Saturday evening in the elegant Noverre Ballroom at Norwich’s Assembly House.  Our keynote speaker was Dr David Rose from the School of Environmental Sciences at the University of East Anglia, who discussed the challenges that a scientifically-informed public body such as the Arctic Council must face as it tries to shape policy in today’s political climate of fake news and alternative facts.  Delegates then had the chance to wager a couple of pounds on their Arctic-related knowledge in entertaining and educational ‘Arctic pub quiz’!

I launched NORMAC in 2016 in order to raise awareness and understanding of the Arctic amongst youth, to inspire them to learn more about the region, and to help them build skills in public speaking, persuasion, negotiation and consensus building.  Surveys of participants in NORMAC 2018—as well as NORMAC’s sister conference in Spain, MAC Bilbao 2018—suggest that both conferences are amply meeting these educational objectives.

What makes NORMAC unusual amongst model-diplomacy conferences is also what makes the Arctic Council unusual amongst international organisations—permanent seats for Arctic indigenous peoples around the negotiating table, and a commitment to consensus-based decision-making.  In practical terms, this means that NORMAC delegates learn not only about the Arctic, but also about the indigenous peoples who call it home.  And they experience not only how to take a position and defend it, but also how to find the bridging solution that unifies many differing and sometimes hotly defended positions.

The fifth annual NORMAC conference is already scheduled for the second weekend of March 2019.  If your school would like to participate, please don’t hesitate to register early interest.  I’d particularly welcome participation from schools in the Arctic, and especially from indigenous pupils.

Finally, very special thanks as always must go to the Norwich School pupils and staff who assisted me in organising and running NORMAC 2019.  We received glowing feedback from both delegates and teachers alike, and I look forward to next year.