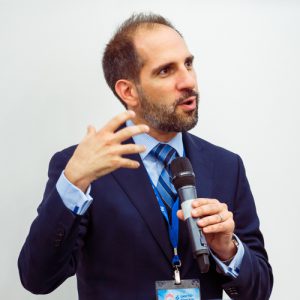 Dr Anthony Speca is Managing Principal of Polar Aspect, a consultancy he founded in 2012. He has advised government particularly on issues of Arctic governance and fiscal policy. He has also published articles on Arctic issues, and he has spoken about the Arctic to various organisations and universities. He has lived and worked in Arctic Canada, and he has travelled elsewhere in the North American and European Arctic.

Anthony views the Arctic first and foremost as a homeland, especially for its Indigenous peoples, where human development and environmental sustainability both matter.  Inspired to share this vision of the Arctic with younger generations, in 2016 Anthony created and launched the world’s only secondary-school Model Arctic Council (MAC) programme.  He has since offered numerous MAC conferences in collaboration with schools in the UK and Spain, as well as undergraduate MAC conferences in collaboration with universities in the UK and Canada.  He also launched an online MAC delegate training and conference programme for schools, and Polar Aspect MACs have reached hundreds of students from many countries.

Anthony combines this innovative educational work with faculty appointments to Norwich School and the University of East Anglia in the UK, and to Trent University in Canada. He teaches Philosophy, Politics and Economics at upper secondary-school level, and Geography and Circumpolar Studies at university level. He also serves as Managing Director of the Læra Institute for Circumpolar Education, an institute that he helped to establish within the international University of the Arctic.

Formerly, Anthony was a senior policy official with the Government of Nunavut in the Canadian Arctic.  He directed a team of analysts advising policymakers on fiscal and economic issues, and he helped strategise negotiations for the devolution of lands and resources from Ottawa.  He also represented Nunavut on intergovernmental panels dealing with fiscal relations, and on regulatory panels dealing with the mining industry.

Anthony’s career has also ranged over business and finance.  He was a business strategy consultant with The Boston Consulting Group in Australia and New Zealand, focused on the energy sector.  Later, he marketed fixed-income securities with RBC Capital Markets and National Bank Financial in Canada, before rejoining The Boston Consulting Group in the UK as a public-sector specialist.

Anthony is a Fellow of the Royal Geographical Society and the Royal Society of Arts.  He is a member of the British Association for Canadian Studies, the International Arctic Social Sciences Association, Polar Educators International and the UK Arctic Club.  He holds a Ph.D. in Philosophy from the University of Toronto, and he has trained in negotiation and mediation.

Whether in the Arctic or ‘down South’, Anthony is a keen amateur photographer.  Please feel free to browse his online portfolio.

A PDF copy of this resume is available for download.