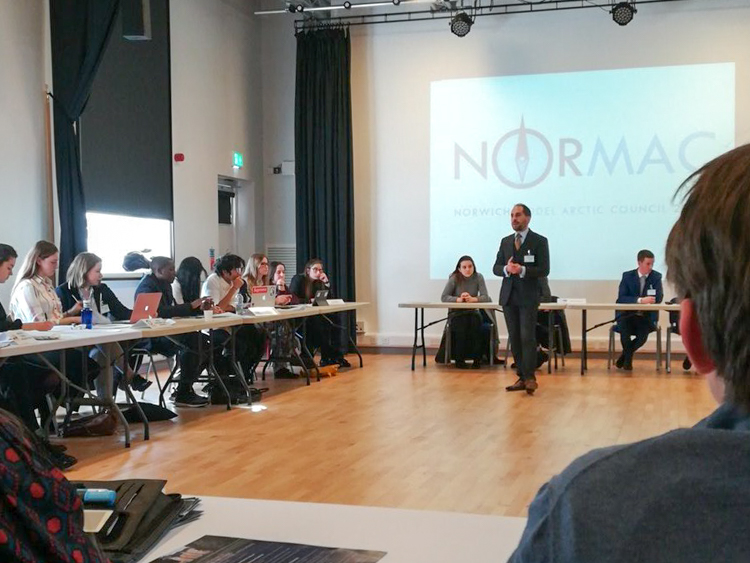 The third annual Norwich Model Arctic Council (NORMAC) convened over the weekend of 23rd to 25th February at Norwich School in the UK.  A larger event that NORMAC 2017, this year’s conference involved 46 pupils from 8 secondary schools in the UK and Spain.  Two of the schools involved were UK international schools, and participating pupils—or delegates, as they’re known—hailed not only from the UK and Spain, but also 14 other countries in Africa, Asia, Europe and North America.  I’m pleased that NORMAC is beginning to gain a bit of international exposure, however modest.

I launched NORMAC in 2016 in order to raise awareness and understanding of the Arctic amongst youth.  What makes NORMAC unusual amongst model-diplomacy conferences is also what makes the Arctic Council unusual amongst international organisations—permanent seats for Arctic indigenous peoples around the negotiating table, and a commitment to consensus-based decision-making.  In practical terms, this means that NORMAC delegates learn not only about the Arctic, but also about the indigenous peoples who call it home.  And they experience not only how to take a position and defend it, but also how to find the bridging solution that unifies many differing and sometimes hotly defended positions.

NORMAC 2018 began with a welcome dinner on Friday.  Our keynote speakers were Ms Sarah Gavron and Mr David Katznelson, filmmakers and co-directors of Village at the End of the World, a documentary about contemporary life in the remote settlement of Niaqornat, Greenland.  Ms Gavron and Mr Katznelson treated delegates to first-hand accounts of their experience filming in the Arctic, and about the cultural and ethical issues faced by ‘southern’ artists wishing to portray indigenous society.  Delegates then enjoyed a private screening of the film the following evening.

Saturday and Sunday involved many hours of diplomatic meetings, as delegates simulated meetings of three Arctic Council Working Groups—AMAP, PAME and SDWG—as well as a Senior Arctic Officials’ meeting and a Ministerial.  Delegates considered a number of questions facing the Arctic today—methane hydrates and climate change, seismic exploration for oil and gas in the Arctic offshore, and broadband connectivity in the Arctic.  During the Ministerial meeting, delegates also considered the question of admitting the European Union as an official observer of the Arctic Council.

In contrast to NORMAC 2016 and 2017, consensus proved elusive at NORMAC 2018.  Delegates managed to agree on a common approach to the question of broadband connectivity in the Arctic, but they were forced to defer discussion of the other issues until such time as consensus could be more readily achieved.  Perhaps at NORMAC 2019?

Indeed, the fourth annual NORMAC conference is already scheduled for the first weekend of March 2019.  If your school would like to participate, please don’t hesitate to register early interest.  I’d particularly welcome participation from schools in the Arctic, and especially from indigenous pupils.

Finally, special thanks must go to the Norwich School pupils and staff who assisted me in organising and running NORMAC 2018.  We received glowing feedback from both delegates and teachers alike, and I look forward to next year.