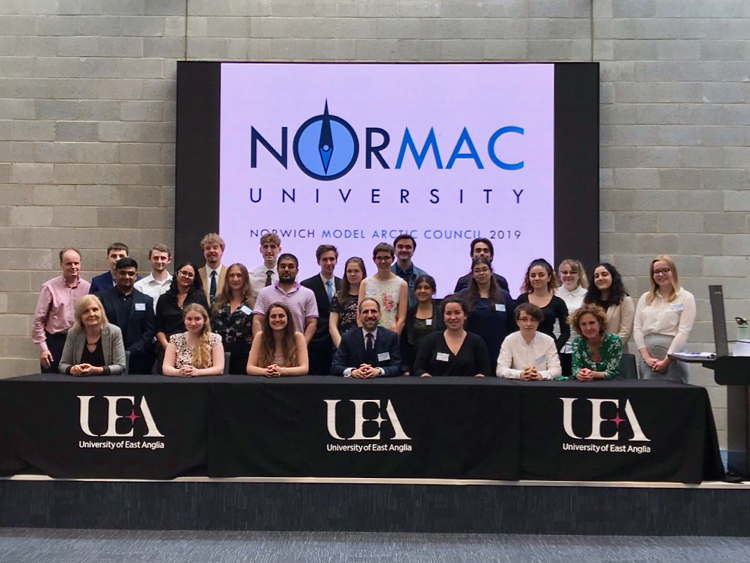 I’m delighted to announce that last week I launched the first Norwich Model Arctic Council for University (NORMAC University), in collaboration with Trent University in Canada and the University of East Anglia (UEA) in the UK.  Twenty-three students from these two universities gathered together on the UEA campus for five days of learning about the Arctic, including talks from Arctic experts, a field trip to the Scott Polar Research Institute (SPRI) at the University of Cambridge, and a three-day simulation of a cycle of meetings of the Arctic Council.

NORMAC University 2019 began with a teaching day, involving expert presentations on the Arctic, the Arctic Council and related topics.  Students then had the opportunity to visit the Air-Sea-Ice Chamber at the UEA School of Environmental Science—one of the only laboratories of its kind in the world—as well as to learn about the work of the UEA-based Tyndall Centre for Climate Change Research.  The MAC simulation formally began later that afternoon with opening speeches from delegates, before adjourning for an informal welcome dinner at which delegates and their peers serving on the NORMAC University 2019 Secretariat staff could all get to know one another better.

The next two days were taken up with diplomatic work.  The issue under consideration was the growth of Arctic shipping, including marine tourism, and delegates began to tackle it in a simulation of the Arctic Council’s Working Group on the Protection of the Arctic Marine Environment.  Initially, delegates found it difficult to make headway against the varied and often opposed positions around the diplomatic table.  But by the end of the Senior Arctic Officials meeting on the second day, they’d hammered out a draft declaration that they felt able to recommend for consideration at the Ministerial.

Delegates and staff then enjoyed a well-earned break with an evening barbeque on the shores of the UEA Broad, as well as the visit to SPRI the following morning, which included another expert talk on the Arctic, and a tour of the famous SPRI Library and Polar Museum.  The weather was bright and warm, perfect for punting down the River Cam.  All seemed refreshed enough for several more hours of diplomacy at the Ministerial meeting the next day, and delegates were eventually able to reach the required unanimous consensus on their declaration.  That evening, a delegates and staff capped off the programme with a celebratory formal dinner at the UEA-based Sainsbury Centre for the Visual Arts, where displays included a number of ancient and modern artefacts created by indigenous peoples of the North American Arctic.

For many of the participants in NORMAC University 2019, it had been an intense and inspiring five days.  I recall the remarks of two Delegates in particular.  One who’d had little previous experience of public speaking, but who found herself playing a lead role in bringing her fellow delegates to consensus, called NORMAC University ‘life-changing’.  Another told me she’d decided to change her university course from single-honours Geography to joint-honours Geography and International Development as a result of her experience.  As an educator, I could hardly be more uplifted than to hear such sentiments.

NORMAC University is intended to be the first in a new annual series of university-level MACs open to university students from around the world.  If you’re a university educator or student with interest in participating next year, please don’t hesitate to contact me for information about upcoming conferences.

Finally, NORMAC University 2019 was the culmination of two years of thinking and planning, including the signing of a full formal partnership between Trent and UEA, which I was honoured to broker.  My heartfelt thanks go to Trent University and the UEA for sponsoring and hosting the conference, and especially to Prof Heather Nicol and Kate Logan at Trent, and Prof Kevin Hiscock, Dr David Rose, Simon Allen, Claire Arnup and Beth Derks at the UEA.  I look very much forward to further collaboration.