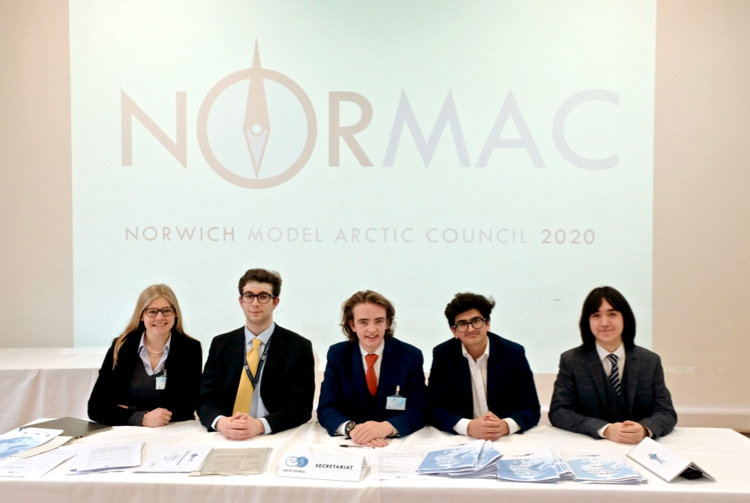 Last week, the fifth annual Norwich Model Arctic Council (NORMAC) convened at Norwich School in the UK. Like last year’s conference, NORMAC 2020 spanned three days, from the afternoon of Thursday 5th March to the afternoon of Sunday 8th March. It was the largest NORMAC conference yet, involving 49 pupils visiting from seven secondary schools in the UK and Spain, who between them represented eleven home countries in Africa, Asia and Europe. I was especially pleased to see some familiar faces, including one pupil attending his third consecutive NORMAC conference!

NORMAC 2020 began with an Opening Ceremony featuring introductory speeches from each delegation, both Arctic States and Arctic indigenous people’s organisations. Delegate speeches were followed by a warm welcome from Mr Steffan Griffiths, Head Master of Norwich School. Delegates then enjoyed a Welcome Dinner to break the ice and get to know one another ahead of the long days of negotiation that were to come.

Those many hours of diplomatic meetings began in the historic and beautiful surrounds of the Great Hospital, where delegates simulated meetings of three Arctic Council Working Groups—EPPR, PAME and SDWG. Delegates considered a number of important challenges facing the Arctic today, and which are very much on the agenda of the real Arctic Council—safety in Arctic marine tourism, plastic pollution in the Arctic marine environment, and sustainable energy in Arctic communities. Having attempted to develop joint approaches to these issues in Working Groups, delegates reconvened at Norwich School on Saturday and Sunday to simulate a Senior Arctic Officials’ Meeting and a Ministerial.

As one might expect, negotiations were fraught at times. But with the active engagement of a number of NORMAC veterans, who had previous experience of trying—and at times failing!—to build consensus on difficult issues within a short few days, delegates managed to agree a joint ‘Norwich Declaration’ on all the issues on their agenda. As one delegate said about what she learned the most from the conference, it is indeed possible for people with different positions or goals to work together towards consensus in a cooperative and productive manner.

NORMAC isn’t only about intense diplomacy, however. In between their meetings, delegates also enjoyed a formal dinner on Saturday evening in the stunning Music Room at Norwich’s Georgian-era Assembly House.  Our keynote speaker was Prof Mariele Neudecker from the Bath School of Art, who discussed the interplay of imagination, the environment, climate-change and the Arctic in her own multimedia artistic oeuvre.  Delegates then had the chance to test their Arctic-related knowledge in entertaining and educational ‘Arctic pub quiz’!

I launched NORMAC in 2016 in order to raise awareness and understanding of the Arctic amongst youth, to inspire them to learn more about the region, and to help them build skills in public speaking, persuasion, negotiation and consensus building.  Feedback from delegates and teachers strongly indicate that these conferences have been very successful in doing so.

As I’ve said before, NORMAC and its sister conferences, MAC Bilbao and the recently-launched WYCOMAC, are unique amongst model-diplomacy conferences. What makes them unique is also what makes the Arctic Council unique amongst international organisations—permanent seats for Arctic indigenous peoples around the negotiating table, and a commitment to consensus-based decision-making.  In practical terms, this means that NORMAC delegates learn not only about the Arctic, but also about the indigenous peoples who call it home.  And they experience not only how to take a position and defend it, but also how to find the bridging solution that unifies many differing and sometimes hotly defended positions.

Finally, very special thanks as always must go to the Norwich School pupils and staff who assisted me in organising and running NORMAC 2020 (senior pupil secretariat pictured above).  We received glowing feedback from both delegates and teachers alike, and I look forward to next year.

The sixth annual NORMAC conference is already tentatively scheduled for 4th to 7th March 2021.  If your school would like to participate, please don’t hesitate to register early interest.  I’d particularly welcome participation from schools in the Arctic, and especially from indigenous pupils.