The second Norwich Model Arctic Council (NORMAC) for University has been a long time in coming. It was intended to take place in the summer of 2020, a year after the first NORMAC for University. The pandemic scuppered those plans, as well as plans for the summer of 2021. So it was with a keen sense of anticipation that I walked into the Council Chamber at the University of East Anglia (UEA) last week to meet the students taking part in NORMAC 2, and finally to declare the conference open!  I had recently been appointed to the faculty of the UEA School of Environmental Sciences as an honorary lecturer, and I was especially proud to welcome the students not only as NORMAC Director, but also as a host. 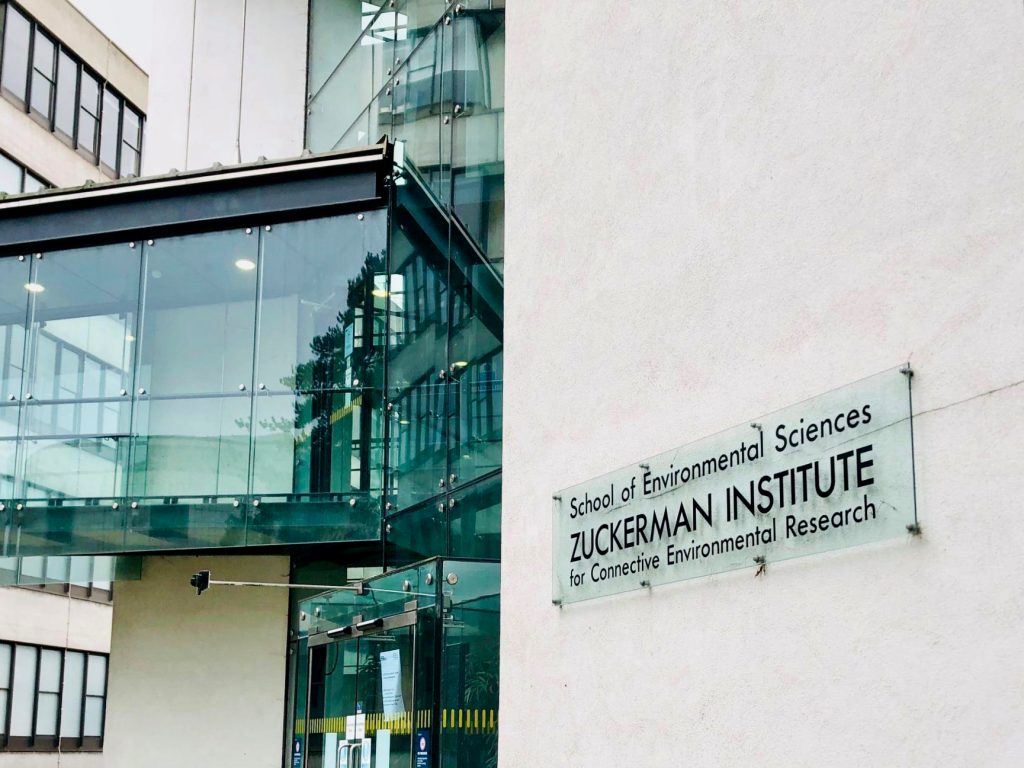 When NORMAC 1 took place in 2019, it was my first in-person MAC for university students.  It has since been joined by SCOTMAC, TRYKOMAC, and my module-based mini-MACs.  I was pleased to be able to collaborate once again with my institutional partners in NORMAC for University—not only UEA, but also Trent University in Canada, where I’m appointed as an adjunct professor.  Their generous support made NORMAC 2 possible, and I’m also grateful to the Royal Geographical Society for additional funding. 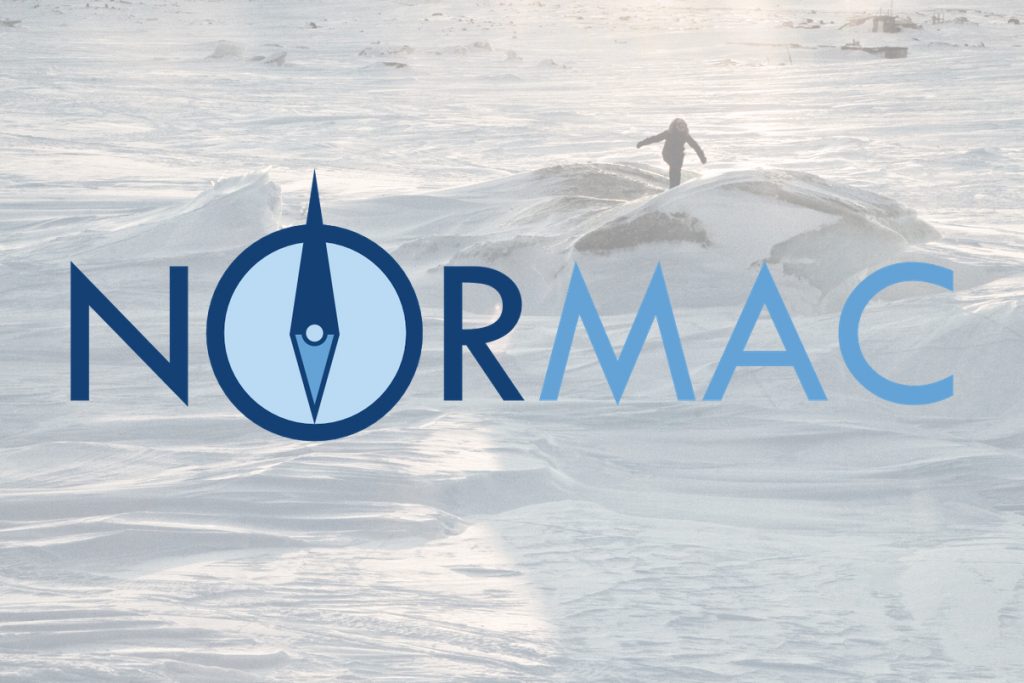 The 24 undergraduate students I met in the UEA Council Chamber last week represented eight universities in the UK and Spain—not only UEA and Trent, but also the universities of Aberdeen, Edinburgh, Highlands and Islands, Navarra, Nottingham and Oxford.  They also represented eight different home countries from across the world—Canada, China, Egypt, Germany, Italy, Latvia, Spain and the UK.  NORMAC is open to undergraduates in any field of study as well, and this year’s participants were enrolled in a variety of courses—Canadian Studies, Economics, English, Environmental Geoscience, Environmental Sciences, Experimental Psychology, International Development, International Relations, Japanese, Marine Science, Philosophy and Politics.  Four students from Trent and UEA served on the ‘NORMAC Secretariat’ and ably assisted me to run the conference, whilst the other students played the roles of diplomats from the Arctic States and Indigenous Permanent Permanent organisations.

Like our other recent MAC conferences, SCOTMAC 1, NORMAC Schools 6 and WYCOMAC 2, NORMAC University 2 took place against the violent backdrop of Russia’s unprovoked and immoral invasion of Ukraine.  Russia also happens to hold the rotating Arctic Council chair until May 2023, and soon after the invasion the other seven Arctic states issued a joint statement declaring that they were unable to proceed with Arctic Council meetings under current modalities.  The Arctic Council’s vital diplomatic work has been paused since then. 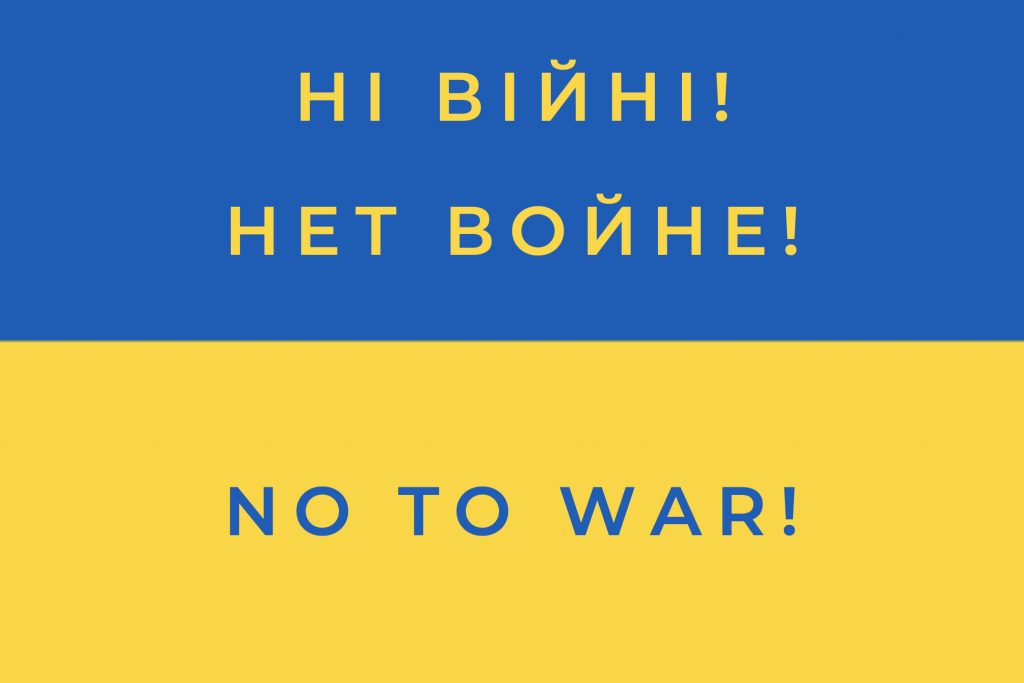 War is a failure of diplomacy, and it was impossible to begin a model diplomacy conference such as NORMAC 2 without first saying ‘No to war!’.  Polar Aspect MAC conferences teach the principles of cooperation, collaboration and consensus—principles with which war is incompatible.  In this context, NORMAC 2 took on special salience as a channel through with youth could demonstrate their commitment to dialogue, and their capacity for concord.

Fortunately, as explained in Polar Aspect’s statement on Ukraine, there was no question of any student, faculty or observer having to accept a fictive Russian chairmanship of NORMAC, as all Polar Aspect MACs are chaired by a third-party Secretariat that I myself direct.  Polar Aspect MACs also respect the Arctic Council prohibition of the discussion of military matters.  NORMAC 2 delegates were therefore able to proceed with their simulation of the Arctic Council, an organisation that remains of enduring value, and to discuss the important the important environmental, social and governance challenges facing the region and its peoples.

At NORMAC 2, delegates discussed the thawing of Arctic permafrost, which is both a consequence and cause of climate change, and which may reach a potentially catastrophic tipping point in the near to medium term.  They also discussed the challenges involved in ensuring the continued transmission of Indigenous Knowledge from elders to youth, which is vital to the cultural survival of Arctic Indigenous peoples, and which preserves and augments one of humanity’s vast storehouses of knowledge.  Delegates submitted discussion papers on both of these topics ahead of the conference, which were circulated to all participants to facilitate consensus building.

NORMAC 2 began on Saturday 25th June with a welcome from Kevin Hiscock, Head of the UEA School of Environmental Sciences, as well as initial guiding words from NORMAC Honorary Chair Tim O’Riordan OBE, one of the founding thinkers behind sustainability science, and a distinguished geographer and environmentalist.  A full ‘teaching day’ followed, with presentations on the Anthropocene Arctic by Martin Mahony of the UEA School of Environmental Sciences, and on the form and function of the Arctic Council by Heather Nicol of Trent’s School for the Study of Canada and School of the Environment.  After lunch, Beth Derks of the UEA School of Politics, Philosophy, Language and Communication Studies offered an interactive workshop on effective public speaking.  It was a privilege for me to join this company with my own teaching presentation on Arctic political geography.

Following Beth’s workshop, the diplomatic simulation officially began.  After making a clear ‘No to war!’ statement, I encouraged delegates to approach NORMAC with a ‘human spirit’, recognising and respecting the Arctic as a homeland, rather than as an unpeopled wilderness or a natural-resource frontier.  The students then took to their feet with opening statements in which Heads of Delegation expressed their perspectives on the Arctic and on the conference topics, and their hopes for fruitful discussions.  We then adjourned to Saporita, a cozy and authentic pizzeria in the city of Norwich, to get to know one another better over a delicious welcome dinner! 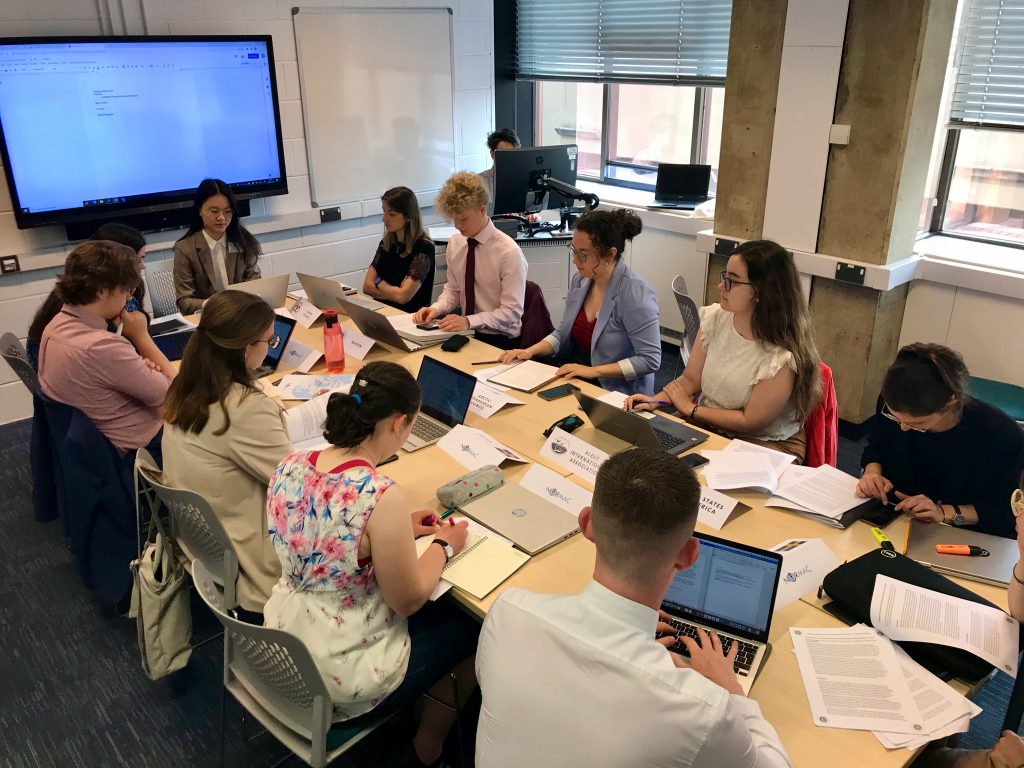 Over the following two days, delegates undertook some intense negotiations.  They began by exchanging initial views in two Working Groups—the Arctic Monitoring and Assessment Programme Working Group, discussing the question of thawing permafrost, and the Sustainable Development Working Group, discussing the question of the intergenerational transfer of Indigenous Knowledge.  The round-table Working Group format allowed them to identify areas of agreement and disagreement, which were noted down diligently by the NORMAC Secretariat.  It would be fair to say that disagreement seemed to outweigh agreement, especially in the Sustainable Development Working Group—so much so that delegates were concerned whether further progress could be made!

With NORMAC 2, I’ve now led two dozen Polar Aspect MACs.  Far more often than not, there comes a point in the MAC when discord between delegates, both in substance and in style, seems to preclude a mutually agreeable outcome.  In some cases, delegates don’t engage in robust enough discussions early in the simulation, and discord emerges only later, with time for negotiations quickly running out!  In other cases, such as at NORMAC 2, it occurs early, giving delegates ample opportunity to pause, reflect and regroup.

Either way, the experience of disagreement, and the search for strategies to overcome it, are important lessons for Polar Aspect MAC delegates.  Indeed, the purpose of my MACs is not only to raise awareness and understanding of the Arctic, its peoples and its challenges, but also to help youth to acquire critical skills in collaboration and consensus building—the antidote, as a teacher once put it to me, of today’s hyper-partisan politics.  Such skills are acquired best ‘in the doing’, and they are acquired all the more firmly when it becomes clear that reaching a collaborative consensus on contentious issues almost always means finding one’s way through a barrier of disagreement.

At all my Polar Aspect MACs, I ensure that participants have time at the end of each day for ‘debriefing’ sessions, in which they can reflect on their negotiations together Arctic experts.  The students at NORMAC 2 had the benefit of advice not only from me, but especially also from Tim O’Riordan, whose avuncular manner and words of wisdom always seemed to inspire them and to put them at their ease.  Their second round of negotiations—in plenary, as Senior Arctic Officials drafting a political declaration on the issues discussed the previous day—went much more smoothly, and they ended the day with considerable momentum and goodwill. 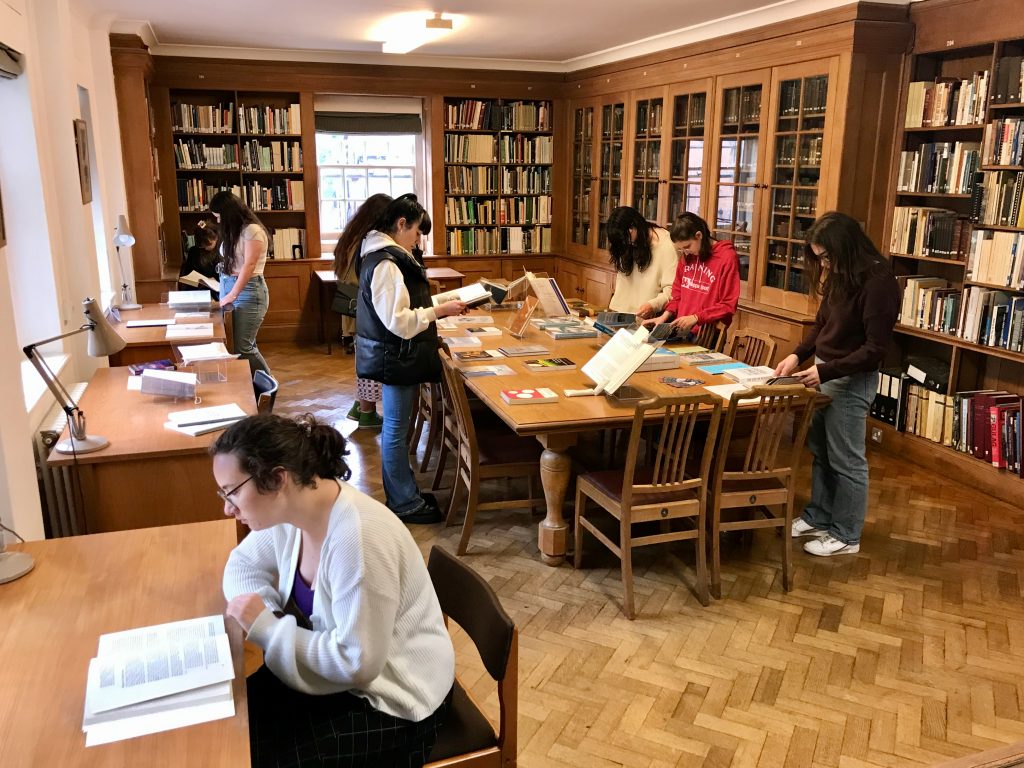 With harmony re-established, it was a good time for delegates to pause.  Fortunately, the fourth day of NORMAC 2 was entirely given over to a field-trip to the famous Scott Polar Research Institute (SPRI) at the University of Cambridge.  There, the participating students heard presentations on Indigenous Knowledge and thawing permafrost from SPRI faculty members Ilona Kater, Gareth Rees and Ogla Tutubalina, and they had the chance to visit SPRI’s small but beautiful Polar Museum and its extensive Library.  An enjoyable afternoon socialising and exploring Cambridge followed. 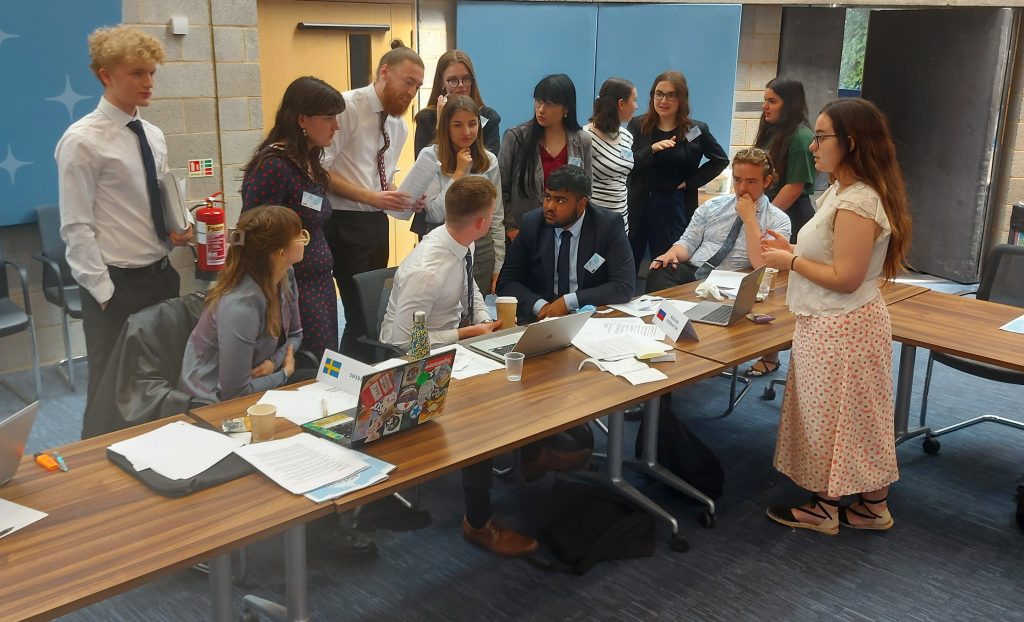 On the fifth and final day of NORMAC 2, students returned to the UEA Council Chamber to work through remaining points of contention and to see if they could reach a mutually acceptable declaration.  They found themselves embroiled in some very serious negotiation, but they had learned to handle their disagreements calmly and constructively.  In the end, they agreed the second Norwich Declaration—perhaps not with ease, but certainly with a greater sense of mutual effort and satisfaction than seemed possible to them on their first difficult day.   After one last reflection session and some time to relax, the entire company then gathered together for the final time in the elegant surrounds of the Music Room at The Assembly House Norwich for a celebratory black-tie dinner—many congratulations to them! 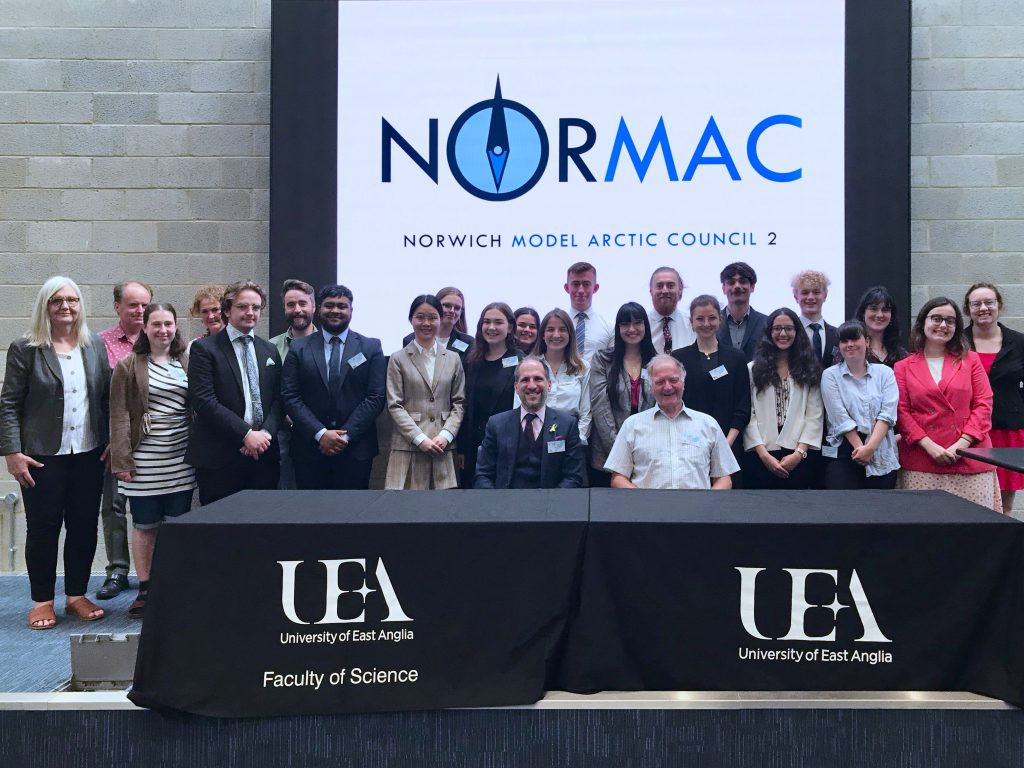 Feedback from the students who participated in NORMAC 2 was overwhelmingly positive:

NORMAC 2 also caught the eye of Petteri Vuorimäki, Finland’s Ambassador for Arctic and Antarctic Affairs, who first became aware of Polar Aspect MAC through our second Online Model Arctic Council for schools.  As the delegates finalised their Norwich Declaration, he tweeted, ‘Have said it before but I say again that I much admire the very idea, enthusiasm and the commitment of all those involved in this learning experience. Great work!’

I’m most grateful indeed for these lovely and encouraging comments, and to all the students, faculty and staff who took part in NORMAC.  I’m especially grateful to the NORMAC Secretariat, without whom I could not have run the conference—to Honorary Chair Tim O’Riordan, and to Katrina Cloherty, Will Dobbin, Mai Hong and Miriam Hussain, the Trent and UEA students who served as chairs and rapporteurs.  Very special thanks for must also go to Sean Harbottle, Cate Knowles and Martin Mahony of UEA, to Kate Logan and Heather Nicol of Trent University, and to the Royal Geographical Society.

Look out for NORMAC University 3 next year!  Don’t hesitate to contact us and sign up for our newsletter to learn more.